Twitter’s new app and social network, Periscope, may be the forerunner of a new age of digital marketing, allowing companies to more accurately measure sentiment real-time. 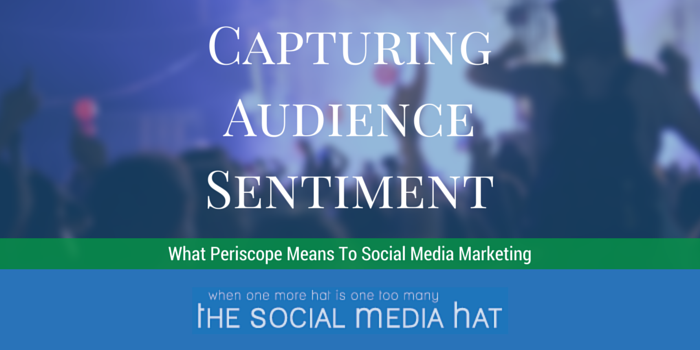 Sam Seaborn: The dials go from zero to 100. They dial up if they like what he’s saying. They dial down if they don’t. All the numbers lead to a central computer.
Lisa Sherborne: Like the Nielsens.

The West Wing, as you know, is one of my favorite television series. During the third season, President Bartlett was tasked with delivering the annual State Of The Union address, after having just been censured by Congress for not revealing his MS. On the night of the speech, Press Secretary CJ Craig allows a journalist from Vanity Fair, Lisa Sherborne, access to their control room where communications deputy Sam Seaborn, who was also Lisa’s ex-fiance, is monitoring the impact the speech has. While Lisa is trying to talk to him, he’s busy watching a series of monitors that are displaying multiple line graphs. When she asks what he’s looking at, he explains, and gives viewers everywhere an inside glimpse into what it’s like to create content for your audience based on audience sentiment. 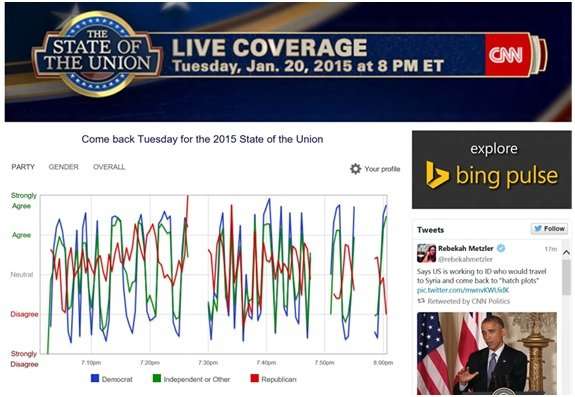 With this kind of data, speechwriters are able to determine which sections of the speech resonate with their audience and which sections do not. They can hone and polish the words they use, their cadence, and the overall message being delivered. It’s become an invaluable aspect of modern speech writing.

As a blog writer, I can only imagine how helpful it would be to know from a reader at what point in my article they got lost or confused, or which sentence was so powerful it made them literally stop and think.

While this level of feedback would be incredibly useful, there are two major challenges of implementation.

First, in order to secure this data, groups and measuring systems have to be set up in advance. The President’s staff and other politicians use focus groups. The Neilsens, the television ratings group that you’ve no doubt heard of, chooses families in advance and installs special equipment in their homes to measure which programs are watched and for how long. Such implementations are costly and require intent. You have to know that you want to measure it well enough in advance in order to secure your audience and methodology.

Second, on a far more practical level, none of these scenarios are even remotely possible when it comes to blogging and social media marketing.

Yet that may soon change.

Consider Twitter’s new app and social network, Periscope. It’s a live streaming video platform much like Meerkat or Twitch. (I wrote a complete How To over on the SiteSell blog that covers everything you need to know about Periscope.)

As I mention in the article, as you’re broadcasting from Periscope, anyone who is viewing your broadcast can tap their screen and a little heart floats up. It’s a cute way for them to signify that they like your broadcast.

It’s all about those little hearts. Let me explain.

As I was playing with Periscope throughout the day, tuning in to different people’s broadcasts, we discovered that you’re not limited to a single heart. Unlike a +1 or Like or Favorite, you can tap your phone as often as you want, sending up dozens and dozens of floating hearts.

But there’s an even deeper layer here that I hope Twitter and Periscope are able to mine for data.

Because you can tap your phone at any time, over and over, that means that you can be indicating to the broadcaster real-time that you like what is being said. Perhaps he said something profound, or maybe she turned the camera toward some gorgeous scenery. Whatever the case may be, you can give that immediate feedback which tells that they’ve said or done something that resonated with you.

Periscope can, potentially, allow any broadcaster the ability to gauge how well their message is resonating with their audience.

Of course that word “potentially” is important. Such reporting ability is something that doesn’t exist yet, at least not publicly, so it’s something that would need to be developed.

First, Periscope has to be tracking these signals and create a reporting system that will make the data accessible to broadcasters. Presumably, this doesn’t represent a significant technical hurdle.

Second, there’s an issue of bad data. Anyone at any time can view a broadcast and choose to tap incessantly, creating a non-stop stream of hearts and skewing the data. Since limiting the amount of tapping you could do would break the concept, I think a more elegant solution would be to be able to block or exclude certain users from reporting. So if you so get someone that’s just laying it on, you can simply remove them from the analysis and ignore their actions.

I can’t say that I’m a huge fan of the hearts themselves. The imagery has nothing to do with the app concept and may be too cute. But as a potential marketing metric, I’m ecstatic!

Imagine being able to create a video broadcast and then be able to review it afterwards and have moment-by-moment indicators for how well your content was received? It’s one thing to get nice comments after a 30-minute Hangout On Air, but it’s something else entirely to know that your introduction fell flat, one of your guests was awesome, and that everything thought your closing was nice.

Live presenters get this feedback of course from their audience members who are in the room and responding visually and audibly to what’s being said, but even then, you have to base your opinion on how you did on your own recollection. There’s no data for comparison or analysis.

Instead, bloggers and presenters can use Periscope to reach a live audience, get that valuable feedback, and then still have a video recording to be used elsewhere.

For instance, I might start presenting readings of some of my key blog posts as a series. i could set a schedule and announce and promote it ahead of time, letting people know that I’ll be broadcasting on Periscope at such-and-such a time on these days. Each time, I would deliver a predetermed presentation of content. And after each broadcast, I would be able to guage how effective every part of the presentation went. And if it went well overall, I could then upload the video to Facebook and YouTube.

It’s said so often that it’s a cliché, but that’s only because it’s true. These are exciting times that we live in. Developments like this are what makes me excited to be doing what I’m doing.

I certainly hope you’ll download Periscope and check it out. I know it’s only for iOS but I believe Twitter will release a version for Android soon enough. In the meantime, you can find me at @Mike_Allton.

There are many virtual event ideas that brands can explore, from large to small, and with varying goals and objectives.

Learn From My Virtual Event Experiences