Buffer Adds Scheduling for Pinterest, and You Won’t Believe What Happens Next!

You are here: Home / Social Media Tools / Buffer Adds Scheduling for Pinterest, and You Won’t Believe What Happens Next!
Reading Time: 3 minutes

Hyperbole aside, this is a big deal. For Buffer, for Pinterest, and for you!

Buffer (http://www.buffer.com) has announced that they have released full support for scheduling pins to Pinterest. While this is a major coup for the four year old social media management tool, the real winners are undoubtedly Buffer’s users and Pinterest which, as a platform, is trying to encourage more mainstream usage.

Joel Gascoigne, co-founder of Buffer, says, “We’re over the moon about the opportunity to be an official Pinterest Marketing Developer Partner, and we’re so grateful for the chance to further assist [our users] with [their] social media sharing on a network as vital and vibrant as Pinterest.”

Buffer already supports Twitter, Facebook, Google+ and LinkedIn, including Facebook Pages, Groups and LinkedIn Company Pages. Adding Pinterest to the mix really provides an excellent level of coverage for the social networks that most businesses and entrepreneurs should be focused on.

Essentially, Buffer users can now connect their Pinterest account and schedule pins to be posted. If you haven’t yet spent much time with Pinterest, a pin can be an image and it can include a description and a link. It’s a fantastic platform for sharing blog posts, stunning imagery, and of course infographics.

When scheduling a pin, Buffer users can choose from any of their public or group boards and, like any other buffered post, the pin can be sent now, added to your queue, or sent next. And of course, like all of your other connected social profiles, your Pinterest profile gets it’s own schedule and queue, which means you can take advantage of Pinterest pinning best practices.

Adding this capability not only makes Buffer even better for their current users, but also launches them into the Pinterest field where, previously, there were only a few third-party players, such as Tailwind or Viralwoot. It will be interesting to see how this develops, and where there’s a rush of Pinterest users getting on board with Buffer in the coming weeks as news spreads.

And at the same time, this is potentially a massive financial win for Buffer, as Pinterest support is limited to their paid plans. New users can try it for 7 days, but after that they must upgrade to the “Awesome” or “Buffer for Business” plans. If you’re currently happy with Buffer’s Individual (free) plan, will Pinterest integration be the feature that convinces you to go with a paid upgrade? 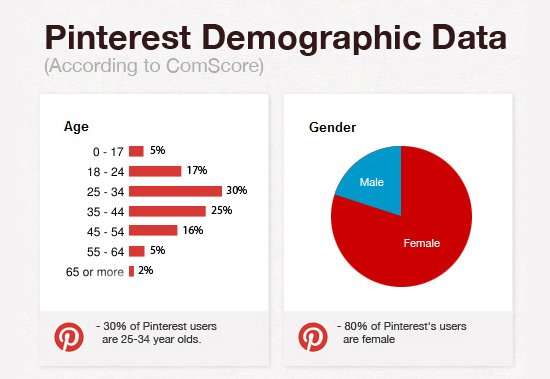 For Pinterest, this is yet another fantastic development. Last year, the social network was facing a worsening public image that portrayed the platform as a place essentially for women to share fashion and make-up tips and products (see data from ComScore to the right from 2012). The demographic was staggeringly skewed female, and the network was desperate to reverse that trend and, at the same time, demonstrate value for businesses and bloggers.

Pinterest added business accounts, which gave pinners access to rich analytics, and has continued to look for ways to support a now widening demographic and user base.

Being able to schedule social media activity for when your audience is most attentive, regardless of the time of day and what you’re actually doing, is essential for businesses and bloggers. Allowing a more mainstream tool like Buffer to access their API is therefore a brilliant move on the part of Pinterest.

And finally, let’s not forget, it’s us bloggers and entrepreneurs and small business owners who could potentially benefit the most. I’ve worked to develop a strong audience on Pinterest, but I have to admit, my pinning activity is generally restricted to early morning and late evening when I have some time to open the app on my iPhone. Unless there’s a new blog post or someone else’s article catches my eye during the day, I’m only active on Pinterest during those two time slots.

This development was the topic of discussion on this week’s Manly Pinterest Tips Show with Jeff Sieh, Ian Anderson Gray and Alisa Meredith. They offer some tremendous insights into the use and impact of Buffer’s latest feature.

For a complete guide to using Buffer to manage your social media activity, particularly if you’re an entrepreneur trying to manage all of the demands of a startup, you’ll want to read and bookmark, “The Entrepreneur’s Guide to Using Buffer for Social Media Management.“