You are here: Home / Social Media Articles / 8 Amazing Reasons Why Instagram And Twitter’s Changes Are Good For You
Reading Time: 4 minutes 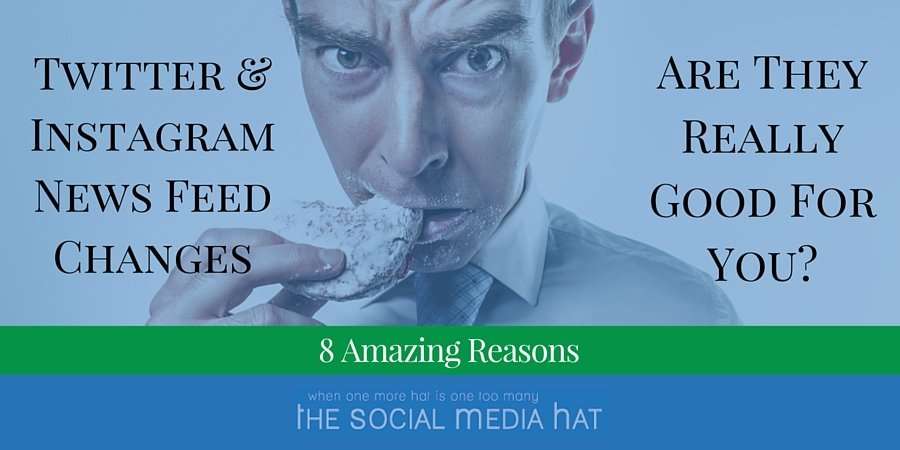 On February 10, Twitter announced their version of a news feed algorithm and the Internet said, “meh.”

A month later, Instagram announced their version of a news feed algorithm and the Internet’s hair caught fire.

The uproar and outrage was so widespread, there was a change.org petition against Instagram and the new feed, and the day before it’s expected release everyone’s Instagram feeds were filled with countless celebrities and brands posting pleas to turn on notifications for their accounts or else their babies might starve.

While I might be exaggerating a touch, many others have not been. So what’s a normal blogger or small business owner to think about these changes?

Honestly, you should be happy for them. Here’s why.

Without the convenience of Google+ Circles (which, unfortunately, only me and 12 other people understood how to use), networks like Twitter and Instagram become impossible to use after a while. The more people that you follow, the busier your feed becomes.

Most Twitter users tend to only follow a few specific Lists that they’ve created, which means they’re ignoring the rest of the folks they’re “following.”

And most Instagramers only spend a few minutes a day on the platform, yet are following an average of 822 accounts (Optical Cortex data). What are the odds that you see even a fraction of the posts from the brands that you follow?

So with these new feeds and algorithmic placement we may begin to actually see tweets and posts that we genuinely are interested in, and would not have seen otherwise.

Of course, that requires these networks to get pretty good at figuring out what we are or are not interested in. Help them along by giving a few extra Favorites and Hearts the next time you’re in the app, on tweets and posts you like. The less passive you are in your use, the more indicators you’ll give the network on what you’re interested in.

Now, with algorithms in place to help bring the best tweets and posts to the top, that means that brands and bloggers are going to have to step up their game with their posts.

The tweets that you see the the images or videos that are posted are simply going to have to be better than ever.

Who doesn’t want to see cooler images and videos? More interesting tweets? I know I do!

By the same token, spam will decrease. At least, the spam we see. Of course, there will always be a faction of users who think that it’s profitable to spam their ads everywhere. But as algorithms improve, we’ll see less and less of that.

And again, as businesses become more savvy with these ‘new frontiers’ of social media, their approach and technique will improve. Often, a business that’s ‘spamming’ simply doesn’t know better, but can get better over time.

And that’s where this becomes a Golden Opportunity for us! We’re the lucky ones who have seen this coming and are prepared. Instead of continuing to post the same lame quote graphics that everyone else is sharing. Instead of tweeting the same dry ad about our product’s wonderful benefits, we can be at the forefront of those taking advantage of these new feeds.

Think about it. Most bloggers and businesses out there are not going to change how they use Twitter and Instagram tomorrow. But you can! You can be among the first whose tweets and posts are found at the top of follower’s feeds.

Do your due diligence. Discover not just what makes a great tweet or post, but what your audience is truly interested in and give it to them.

And when you begin to do that, you know what you’ll find? A happy audience! They’ll see more and more of your posts, and since your posts are giving them what they want, they’ll happily favorite and heart and retweet and comment.

Those engagement actions are positive signals that Twitter and Instagram will see and go, “ok, looks like they know what they’re doing, let’s spread their stuff around a little more.”

Ok, maybe they won’t say that, but in essence that’s what the algorithm does. These lines of code look at what you’re posting, how your audience is reacting, and uses that to determine whether more of your audience should see that post, and to whom to show the next post.

As engagement increases, so too do shares and new followers. People see their friends sharing and talking about your posts, and they check you out. They can see from your other recent posts that you’re really on your game, and that your audience is responding.

And they want to be a part of that.

You’ve turned your Twitter and Instagram profiles into social destinations, and everyone wants to be at the party that’s hopping!

And finally, the real magic happens. R.O.I. Bloggers and businesses get to see real returns from their social activities in the form of referral traffic, brand recognition, leads and sales.

Because it’s at this point that your social presence is truly social, which means it’s growing organically and virally. Your audience is responding to what you’re talking about and sharing your stuff of their own accord.

Every day you’re reaching new people and having conversations that matter to both you and your customers.

That’s great for business, and what Social Media is all about!

Which means that now you can really enjoy Twitter and Instagram again! They’re not simply yet another social network you have to be on because Mike told you to.

Each day you can’t wait to tap open the apps on your phone to see what’s going on. Each post becomes a game to see how much better you can do over the last one.

Your audience is happy, and you’re happy.

Instagram and Twitter may have their own motivations for implementing these changes. No doubt they’re partly due to a need to improve user experience, and no doubt partly to help with their own monetization.

But at the end of the day, these kinds of widespread platform changes are good for everyone, if looked at from the right perspective.

Agree or disagree, these changes are coming. But feel free to let me know in the comments why you think these aren’t so hot!